The GREATEST thing about America is that anyone with $5,000 and a hoodie has a chance to start a great tech company.

The WORST thing about America is that anyone with $5,000 and a hoodie has a chance to start a great tech company. 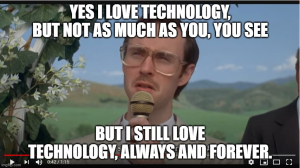 Confused? Don't be. The fact that anyone with 5K and a hoodie has a chance to disrupt our world is the best and worst of us – all at the same time.

Let's start with last week's announcement from Redmond so you know what the hell VIVA is (I'm pulling these from joshbersin.com, who's done a nice job in this post of helping us get our head around it):

Microsoft introduced an offering that is likely to transform the market for enterprise software: Microsoft Viva, a digital platform built on Microsoft 365 designed for the Employee Experience. Developed over several years and integrated with Microsoft Teams, Viva is an Employee Experience Platform carefully architected to leverage a company’s investment in existing systems and Microsoft technology.

Viva, which is built on Microsoft 365 and delivered in Teams, is a place to pull this all together. While the four core Viva apps are new, they cover many of the employee needs for companies and Viva becomes an integration platform for everything else. Out of the box, Viva covers a wide array of application areas, and the company will offer Glint, LinkedIn Learning, and content from Headspace, Skillsoft, and dozens of others in the experience. I’m sure third-party vendors will line up to join the parade as soon as this is launched.

So Viva, in addition to a suite of applications, is a vastly functional “integration platform” that lets IT and HR departments standardize their EX strategy.

OK – that's some overview stuff – let's dig into the details. The 4 Viva apps (read more about them at the link to Bersin above) are:

–-Viva Connections – System that brings Sharepoint and other portal systems together to provide a single place for the employee portal and employee comms! (note, the ! is written as if I'm promoting this as a Microsoft team member)

—Viva Learning – Get your LinkedIn Learning and other tools connected to Teams!

It's all cool, right?  Before I shoot holes in the whole, "game over, man" thing we do when any of the heavyweights pulls together pieces to make our lives easier, let me say this – Microsoft is making the right move and they are the 800 pound gorilla that can take this swing for the fences.

Our continued reliance on MS Office and the move to Office 365 to take advantage of the cloud means we are more connected than we've ever been. Microsoft has also been helped by the pandemic, as Teams became the Avis to Zoom's Hertz related to video conferencing, which led to great adoption of the Teams collaboration suite.

It's all good, and Microsoft is important.  But it's early to say this dominates the corporate world, especially for small to mid size companies, but even for large companies. Here's a few reasons why:

1–Implementation is hard. So you say you've got a portal for me, and I can revolve my EX world about the portal. Cool. Do I just install it? No, turns out to really make this work, you're going to have to think, do some stuff and execute. If Sharepoint has taught us anything through the years, it's that the big tools are cool, but the devil is in the details. Shout out to my corporate homies who are on their 4th cleanup of their Sharepoint portal. Godspeed friends – you're almost there – I think.

2–Adoption is hard. You built it. Will they come? Maybe, maybe not. There's a lot of things vying for their attention. Are you sure the boomers and Gen-Xers are using 365 or is all their work local? Yes, you can force that if their work is not 100% on the network. Are you ready to pick that fight? To achieve the promise of VIVA, there can only be one tool set and everything has to be in the cloud. Confounding variable – Google Drive adoption among your employees you don't even know about.

3–People still love their "best in breed tools" and the edges of VIVA will still be nibbled at by the peeps in hoodies. Related to adoption, people love their Zoom, Ring Central, Slack and about 500 other workplace productivity tools. They think many of these tools are better than Microsoft. Depending on the adoption of Office 365 and Sharepoint, to really ramp the promise of VIVA, you're going to have to mandate that people FULLY COMMIT TO THE USE OF OFFICE 365 AND ANY EXPANSION OF THAT DOMAIN, including VIVA. Will competitors (Salesforce, anyone?) allow that messaging to go unchecked? <HELL NO>. Cue the Fight Night music, and watch your adoption linger in the 50% range when you sum up all the productivity tools that are being used across your company.

4–Privacy will continue to rise in importance. Hey! We have some suggestions for how you might be more productive, and we've also listed you in the expert category for "Most Barstool Videos Watched at Work". I kid – but the more you get into productivity analysis and try to make suggestions, the more people are going want to get off the Matrix.

5–Development of strategy (and at times content for the machine) isn't automated.  Really related to #1.  True Strategy and Implementation takes work. You're going to need a bigger boat.

6–The small and mid-cap company world places this initiative and all that is listed above as the 26th most important thing on their list. They'd love to get the goodies – but they're attempting to survive. Thus, the revolution will be slightly delayed.

In short, I think Microsoft VIVA is important and potentially transformational for companies with incredibly large market caps. For everyone else, it's complicated.  Those kids in the hoodies in the HR tech space? They're the snipers in this scenario, and they'll keep taking their shots with micro-solutions that make sense.

Buckle up, VIVA team. What you are doing is cool, but the revolution is going to take longer than you think.  In fact, everyone who's working to compete with you thinks you are "The Man" and THEY are the revolution.