Do you believe that COVID-related unemployment benefits are preventing people from rejoining the workforce? This became a hot topic when the April 2021 Jobs Report showed one of the biggest misses on record—meaning the actual number of jobs the American economy was expected to add fell dramatically short of the expectation.

Like everything these days, it's been politicized. The GOP is out in force claiming people have been de-incentivized to work because of COVID unemployment. Joe Biden made a rare appearance to defend unemployment benefits policy, citing “There’s been a lot of discussion since Friday’s report that people are being paid to stay home rather than go to work," Biden said. “We don’t see much evidence of that.” 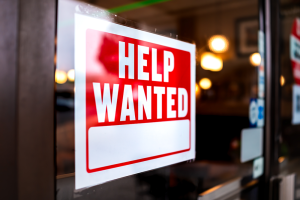 There's only two pieces of data that matter, and they're facts, not opinions. 1) Employers can't find the people they need, and 2) Potential employees that remain among the unemployed aren't taking jobs.

So let's get out of the opinion game and look at the numbers, and think about how a modern TA/Recruiting department deals with a sudden rush of openings. I've been through that game many times (as many of you have) and know the following to be true.

Let's start with the facts in the April 2021 jobs report:

—Total Number of Jobs Economists Expected to Fill out of that number: 1,000,000

Feels like an F at best. Maybe there's a curve we're not aware of.

But that analysis is just low hanging fruit. Many of you are already aware of these numbers. So let's add some value by thinking about how a modern TA/Recruiting Department tackles a big rush of open jobs.

Many of you have seen your companies experience something similar to this. It goes a little something like this:

1–Your company was doing NO HIRING, THEN THEY OPENED UP 4-6 MONTHS WORTH OF POSITIONS.

You've been there, right? I feel you, friend.

So when that happens to a normal TA/Recruiting function, how do they react?

2–The normal TA/Recruiting Department goes into battle mode with the order to get a big chunk of the jobs filled each month. But remember that normal TA shops are designed to knock out a normal amount—not a peak amount—of positions every 60 days.

3–Let's say you're dealing with that six month backlog and your TA/Recruiting Team is running at 150% capacity—hero time in the recruiting function. How long does that mean it takes your TA/recruiting team, running hot, to work through a 4-6 month backlog that pretty much got opened all at one time?  Well, it's not 60 days, because the company wouldn't let them hire up to get ready. At the end of the day, great/hero/epic TA/Recruiting performance works through this COVID-like backlog in 3-5 months, depending on staffing levels.  It's just math related to resources they have vs what the business threw on them. Nobody's to blame, but everyone's involved in the solution. Patience is required.

4–That means that a TA team dealing with a COVID-related backlog is operating at SUPERHERO levels if they are dispatching 1/3 of that backlog a month and doing very well at 1/4 of the backlog dispatched per month. That means it takes them a quarter or more simply to get back to normal, and that assumes the position volume dump gets back to normal. Show them some love at these levels.

Now, let's compare that valid expectation of a crisis mode TA/Recruiting function kicking ass with what the economy just delivered:

—The Post-COVID dump of open positions: 7,000,000 (This is the economy acting like starved hiring managers.)

—The economists' expectation of what would get filled, aka the monthly target: 1,000,000 (at this rate, the backlog gets taken care of after 7 months, so seems like a low expectation, but we'll count it as reasonable based on the whole economy, what I laid out above, and the fact many are desperate for candidates.)

—Time to remove the backlog in TA/Recruiting terms at that pace: 26.3 months. W.T.F.

Yeah, that's a problem. To say nothing of the fact that the economy is not going to stop opening jobs—kind of like your hiring managers.

THE BOTTOM LINE IS THIS: Policy matters. We talk all the time about whether to add sign-on bonuses and other features to make our hiring more successful. But you can't have incentives (COVID-based unemployment benefits) that go against people reentering the work marketplace and expect better results.

The situation will improve. States are already moving to eliminate their COVID-related unemployment benefits, and the federal benefit runs out in September.

But, this is for sure: if the policy and the folks who ran it were a TA/Recruiting department leader, they'd be under the gun to make sure April's performance level didn't happen again.