Read the news and it's easy to fall into the trap of what I like to call "Amazon is Bad" and the close cousin, "The Amazon Mob."

Where can you find such news? Simple! Examples: "Amazon is Bad" for having the gall to actually defend itself against union organizing attempts at the company's Bessemer, AL distribution facility. Shocking! How dare they! Amazon is also bad for being led by one of the richest people on the planet—a crime that leads to a small mob at one of his houses with a guillotine in his driveway. 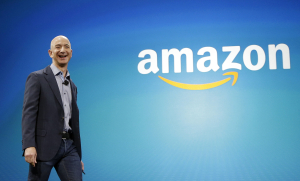 It's trendy to hate the establishment these days. Unfortunately, not enough people are speaking up to challenge BS when they see it, for fear of some form of being cancelled.

So I'll say it related to Amazon. Just because there was a subset of employees in Alabama interested in a union doesn't mean the company can't defend itself.  The law allows Amazon to tell its side of the story and respond with FOE – Facts, Opinions and Examples.

As far as the guillotine, if you're down with that demonstration in the driveway of any human being, good luck to you and yours. You'll soon have to find another mob to keep the hate alive.

But wait, there's more! And it's HR related:

Well, Business Insider talked to a dozen employees. We've lost our minds with the narrative- building in reports like this. It works, or they wouldn't keep doing it. You click, I click. Turns out, they talked to only twelve people, probably a few disgruntled folks who were organized by a single person.

Articles like this one get posted, and the narrative—left largely unchecked—is that Amazon is a bad place to work and how they review employees is a big part of the negativity.

The journalists talked to 12 employees, my friends.  Amazon is a company with 575,000 employees!

But if the Business Insider did anything positive with this article, it did provide some access to 2021 Performance Management design at Amazon. So, while we're here, let's take a look at a couple of items cited as performance management practices at Amazon and analyze them.  Here are a couple that jumped out as relevant:

From BI Article: "One new policy introduces a performance rating metric, with managers telling their direct reports where they rank on a scale from "needs improvement" to "achieves" to "exceeds." The new directive adds a dose of clarity to Amazon's secretive performance review system that left employees guessing about their performance review ratings, as Insider previously reported."

KD analysis: Amazon is making the move many have already made, simplifying rating scales to a 3-point rating scale. Regardless of wording, this is the "Does Not Meet/Meets/Exceeds" 3-point scale many use. It is popular and works because managers have to take a stand, and the 3-point scale forces managers to give real ratings and real feedback. This is a good thing.

From BI Article: "Amazon managers use a secret rating tied to compensation to grade on a curve, according to employees and internal documents, placing those at the bottom on a performance improvement plan, called PIP at Amazon. One document viewed by Insider shows company leaders "expect 20% of Amazonians" to receive the highest rating and 5% to receive the lowest for the current review cycle."

KD Analysis: Guidance on how many employees can get the top rating is expected, otherwise you'd have rating inflation 100% of the time. For fans of the bell curve, you automatically understand that asking for 5% of employees to be identified as low performers is kind, not harsh. Amazon is asking for very little here; still, it's vilified by the media. Weak journalism but representative of the media's treatment of anything real world these days.

From the BI Article: "According to employees, the more important performance measure is what Amazon calls "Overall Value (OV)" ratings because they have a bigger influence on compensation. An internal document seen by Insider said OV ratings were used as an "input into the annual compensation planning process.

An internal document provided to managers said: "We expect 20% of Amazonians are TT," 15% are HV3 (the highest of the HV ratings), 25% are HV2, 35% are HV1, and 5% are LE. Another document showed how these OV ratings corresponded to pay. Amazon employees are each put in a pay band with a range for their total compensation, made up of base pay and stock options. The OV ratings are one of the key factors used to determine what percentage of the pay band an employee will get. One internal document said those placed in the top-performing group could reach 100% of their pay target, while those on the HV1 grade got zero upside.

The documents also showed that while managers could disclose where an employee ranked from "needs improvement" to "exceeds," they couldn't share the "input scale" number from 1 to 7 on which those ratings are based. So while an employee might know that they ranked as "achieves," they wouldn't be told specifically if they landed at the high or low end of the score range necessary to obtain that ranking."

KD Analysis: Yeah, that’s called the merit matrix. It’s not a new concept, and if Amazon wants to give its highest performers in the “Meets/Achieves” band more money, that’s a good thing. Do they owe their employees 7 different points on the rating scale to back that up? No, they do not, because that gets in the way of clear and direct feedback on how the employee is doing: bad/good/great. Also, further segmentation can also be used to determine things like succession planning. Simply put, do great work and you’ll be rewarded. It's not that hard.

Summary: I love how a news organization can talk to 12 people and put a headline up that says “Amazon workers feel left in the dark.”

Everything doesn't have to be a conspiracy, especially if you only talk to 12 out of 575,000 employees.